Contrary to popular belief, fights between Spinosaurus and Tyrannosaurus are practically non-existant. Both animals are equally matched and would risk equal injury that could prove fatal or otherwise be a hindrance. While the Spinosaurus arms are longer and more powerful than a Tyrannosaurus, it lacks the bite force and the crushing teeth which make the Tyrannosaurus so iconic.

It is concluded that the reason why the JP/// Spinosaurus brought down the Tyrannosaurus with relative ease was because the Tyrannosaurus was an inexperienced subadult. Realistically, both species would prefer to avoid one another, and if a chance meeting does occur, both would use roars and size to intimidate one another until one backs down.

[This rule first came about in the roleplay when it became apparent too many Tyrannosaurus and Spinosaurus players were deliberately causing fights to "re-enact" the movie, and it became so common that in the end it became irritatingly unrealistic].

Male: Mottled brown body, faint reddish tint along tip of the sail, sometimes on the muzzle as well. Faint blue patterns on each side of the sail, cracks of white commonly pattern entire animal.

Female: Same as male, except the reddish tint is fainter and the patterns on the sail are yellow instead of blue.

Diet: Mostly fish but also small sharks and man-sized dinosaurs. Spinosaurus will also take dying or weakened hadrosaurs, as well as scare off other carnivores from their kills.

Preferred Habitat: Beach, Deltas, River, even occasionally skimming the open ocean; anywhere near a water source with a good supply of aquatic prey.

Spinosaurus is an enormous carnivore, exceeding Tyrannosaurus in size and thus making it the largest carnivorous dinosaur on Isla Sorna. Despite its immense size, Spinosaurus prefers to hunt smaller prey than Tyrannosaurus with fish taking up a large bulk of its diet. It tends to roam near rivers and it is an excellent swimmer; often while its body is submerged its tall sail sticks out of the water like a gigantic shark's fin. Spinosaurus can also sometimes be seen wallowing or resting in thick, gloopy mud; spreading out its body weight to avoid sinking. While other theropods may be able to outrun a Spinosaurus on land, very few can match it in the water as the sail backed carnivore is a very capable and surprisingly agile swimmer.

The most recognizable feature of this animal is the huge sail on its back, up to 2 meters tall and filled with blood vessels. This sail helps keep Spinosaurus cool during periods of intense heat, enabling it to cope with the sweltering heat of the dry season much more effectively than other similarly sized animals. Young individuals lack the sail, and thus it is almost impossible to distinguish between infant Spinosaurus and infant Baryonyx. Other notable features of this animal include its long, crocodile-like jaws containing conical, non-serrated teeth and long, powerfully-muscled forelimbs ending in three fingers tipped with sharply-curved claws. Similarly to a Baryonyx, the Spinosaurus has an enlarged thumb claw, usually used to spear its prey from the water, but also used as a weapon when fighting and can deal a lethal blow to even large dinosaurs if aimed well.

Spinosaurus is a territorial animal. It produces loud, relatively high-pitched bellows to remind other carnivores, namely other Spinosaurus; to stay away, and will react aggressively to other animals (or objects) that may appear to be incurring on its domain. Testosterone-fuelled males are even more aggressive than females and will spar with other males for mating rights, using their powerful arms and sharp, curved claws to grapple one another into submission. Males are extremely protective over their females and nests, and will fight to the death to protect their family; often staying behind in cases of dire threats to cover his family's escape.

A Spinosaurus emits a territorial call. 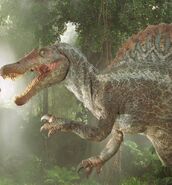 Sailback (deceased)
Add a photo to this gallery
Retrieved from "https://jpl-live-the-legend.fandom.com/wiki/Spinosaurus_aegyptiacus?oldid=5641"
Community content is available under CC-BY-SA unless otherwise noted.