Male (subadult): Like the older males, except a noticeably more vivid green.

Female- Molted brown overall with a cream colored belly and black back stripes.

Diet: Lots of meat from large animals. Due to its size, Tyrannosaurus is primarily an ambush predator, preferring to hunt large prey such as the unarmoured hadrosaurs. Tyrannosaurus has also been known to risk injury or even death by tackling large ceratopsians such as Triceratops and large ankylosaurs such as Ankylosaurus. In packs they are known to attack sauropods. In addition, Tyrannosaurus is a well-known opportunistic feeder and is more than willing to bully away smaller carnivores from their kills. Nothing of a carcass is wasted, as Tyrannosaurus will also consume bone.

Preferred Habitat: Not fussy, establishing territory in both dense forests and open plains. It roams wherever its prey may gather, such as the Game Trail or the River.

Social Structure: Solitary or in mated pairs, even seen in familay groups.

Tyrannosaurus is possibly one of the largest and the most fearsome of all predators of Isla Sorna. Only Spinosaurus is larger.

Tyrannosaurus' primary weapon is its enormous head; its skull is made of thick, heavy bone and the jaw muscles are extremely powerful. The thick, robust teeth lining the jaws are serrated along both the front and back edges. The arms are short in comparison to its body size with only two visible clawed fingers, while the hindlegs are very powerful. Females tend to be larger and more robust than males.


Despite its size, Tyrannosaurus is a surprisingly fast runner, able to run at up to 32 mph at short spurts when chasing after prey. It is only able to reach these speeds while running in wide open spaces, as tripping over obstacles and falling on its skull can potentially prove fatal.

Tyrannosaurus attacks its prey head on with its jaws agape. The prey is killed by one or more bone-shattering bites to its head or torso. Tyrannosaurus eats quickly, comsuming flesh, organs and even bone before other Tyrannosaurus are lured to the kill. Tyrannosaurus' has an acute sense of smell and can detect a carcass from several miles away.

Tyrannosaurus are territorial and tend to be aggressive towards one another. However, breeding pairs do form. Female Tyrannosaurus tend to be dominant over their mates. The female can be unpredictable and it is not uncommon for her to tire of her mate and attack him without warning. As a result the male tries to keep the female interested in him by regularly bringing her fresh kills as gifts. He must also always be on top form, ready to battle with rival males who may try to steal away the female as well as the territory itself. The female will not tolerate an ill or injured mate and she can and will kill him, even going as far as cannibalizing from his remains. The breeding pair will share a territory, and both will guard the territory from rival Tyrannosaurus.

Tyrannosaurus displays advanced parental care and both parents participate in rearing the young. Eggs are laid in mounds of dirt and the young are kept in nests surrounded by walls constructed of mud and dung, ten feet across and lined with the bones of previous meals. The young are extremely vicious from birth and will attack their siblings until often only one - the strongest infant - remains. Both parents constantly drag carcasses back to the nest to feed their offspring, however as the young grow, the parents switch to live prey which has been injured significantly to give the young a chance to learn how to tackle and kill their victims by themselves.

Upon leaving the nest the adolescent offspring accompany their parents on hunts, co-operating together to bring down prey. The young are driven away when they reach sub-adulthood, after which they roam the island alone, seeking out territories and mates for themselves. During this time competition between young adults for food, territory and mates is at its highest. Many subadult Tyrannosaurus are killed before they are full-grown; either by their prey or other Tyrannosaurus.

Tyrannosaurus' roar is probably the most distinctive and terrifying of all predator calls on Isla Sorna. 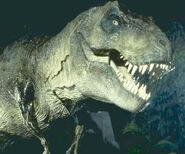 A female makes a kill.

A breeding pair, with young.

A Tyrannosaurus takes on a Triceratops. 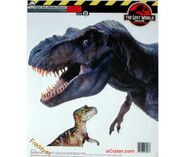 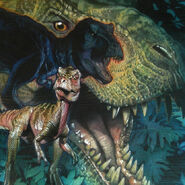 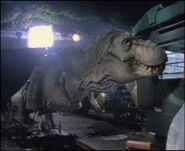 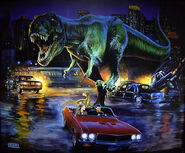 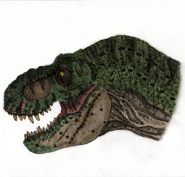 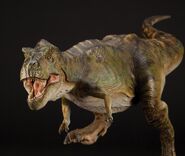 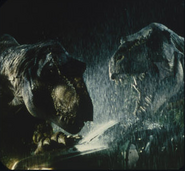 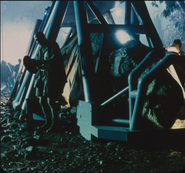 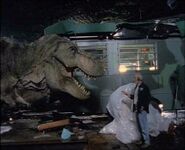 Add a photo to this gallery
Retrieved from "https://jpl-live-the-legend.fandom.com/wiki/Tyrannosaurus_rex?oldid=5708"
Community content is available under CC-BY-SA unless otherwise noted.